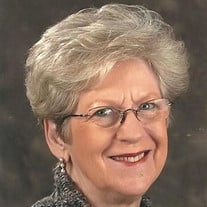 Mrs. Anne Dailey Warren, age 79, formerly of Villa Rica, Georgia, passed away on November 2, 2017. Anne was born in Dallas, Georgia on August 27, 1938, a daughter of the late Thomas Curtis Dailey and Mary Bass Dailey. She graduated from Dallas High School. Anne married Gaines Hudson Warren on April 7, 1956, and they remained in the Dallas area. They enjoyed 59 wonderful years together before his death in 2015. Anne was employed in the medical field for many years and then worked for First National Bank of Paulding County. She retired as manager of the Hiram Branch. Anne and Hudson were blessed with two children, and they spent wonderful times together camping and boating. After their children grew up and married, they enjoyed spending time with their four grandchildren. They were also active members of Heritage Baptist Church in Douglasville, GA. Anne and Hudson, both, loved gardening and traveling. Anne was a member and past secretary of the Skint Chestnut Garden Club and was well known for her horticultural ability. She won many awards at the Penny McHenry Hydrangea Festival. She loved sharing her flowers and cuttings with friends and family. Anne was also an excellent cook and incorporated the fruits of her and Hudson’s gardening skills into delicious meals for family and friends. Anne spent her last seventeen months in Florida, living out her dream of being near her daughter and her extended family in the Panama City area. Anne is survived by her son and daughter-in-law, David and Patsy Warren, of Charlotte, NC, and her daughter and son-in-law, Susan and Lonny Dantzler, of Panama City, FL. Grandchildren, Lorenzo Dantzler and wife, Ashante, of Phoenix, AZ, Warren Dantzler of Austin, TX, Dailey Dantzler of Panama City, FL, and Wendy Warren of Charlotte. NC. Anne was recently blessed with a great grandchild, Luke Dantzler, of Phoenix, Arizona. Also surviving are her sister and brother-in-law, Olivia and Gene Weingarten, of Hoover, AL, and her sister-in-law and her husband, Sally and Kenneth Guyton, of Douglasville, GA, nieces, nephews, and other family members. Visitation for Anne Dailey Warren will be Monday, 11/6/17, at 10 a.m. in the chapel of Jeff Eberhart Funeral Home in Dallas, GA. The funeral service will be at 11 a.m. Interment will follow at the Dallas City Cemetery. In lieu of flowers, the family asks that memorials be made to Heritage Baptist Church, 8800 Rose Ave., Douglasville, GA 30134, in Anne’s memory. Please join the family in honoring her life by visiting www.jeffeberhartfuneralhome.com to sign the register book and share a memory. Jeff Eberhart Funeral Home is honored to serve the family of Mrs. Anne Dailey Warren.

The family of Mrs. Anne Dailey Warren created this Life Tributes page to make it easy to share your memories.

Send flowers to the Warren family.