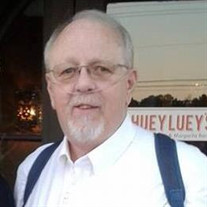 Mr. Calvin Lee Waddell, age 69, of Dallas, GA, passed away peacefully on Saturday, June 29, 2019, at Wellstar Tranquility Hospice in Austell, GA. Mr. Waddell was born on August 10, 1949, in Hempstead, NY, to parents, the late Mr. Fred Christian Waddell, Sr. and Mrs. Frankie Evelyn Shelton Waddell. He was a Veteran of the United States Marine Corps and worked for the Atlanta Journal Constitution at Cox Media Group for many years. Mr. Waddell was a member of the Smyrna United Methodist Church and loved the Lord and serving his church. He enjoyed working in his yard and had a special place in his heart for all animals. Mr. Waddell loved his family and friends and spending time with them. He will be missed dearly by all who knew him. Mr. Waddell is survived by his beloved wife, Mrs. Martha Susan Greenhagen Waddell; children and their spouses, Terry (Jeannie) Acton, Kevin (Terri) Waddell, Tracy (Henry, Jr.) Kingi, Kirk (Heather) Waddell and Richard (Ashley) Waddell; brother, Fred Christian Waddell, Jr.; sister, Regina Bowen. Many other relatives and friends also survive. In addition to his parents, Mr. Waddell was preceded in death by his brother, Michael Waddell, Sr. A Celebration of Life will be held on Saturday, July 13, 2019, at 11:00 AM at the Smyrna United Methodist Church in Dallas, GA, with Reverend Troy White and Pastor Kirk Waddell officiating. Inurnment will be held on Monday, July 15, 2019, at 11:00 AM in the Georgia National Cemetery in Canton, GA, with Marine Military Honors. In lieu of flowers, the family has requested that donations be made to the Smyrna United Methodist Church at 9199 Buchanan Highway, Dallas, GA. 30157, for family support. Please join the family in honoring his life by visiting www.jeffeberhartfuneralhome.com to sign the register book and share a memory. Jeff Eberhart Funeral Home is honored to serve the family of Mr. Calvin Lee Waddell.

The family of Mr. Calvin Lee Waddell created this Life Tributes page to make it easy to share your memories.

Send flowers to the Waddell family.