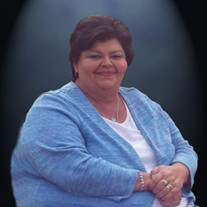 Mrs. Deborah “Day Day” Black, age 60, of Dallas, GA, passed away on Sunday afternoon, December 20, 2015, in a local hospital. Deborah was born on August 13, 1955, in Atlanta, GA, the daughter of the late Newton B. and Sarah Proctor Rozier. She had been a resident of Dallas and Paulding County for the greater part of her life and was a member of the Gloryland Baptist Church. Deborah was associated with the Center for Family Recourses for over 17 years. She loved helping others and was a gospel music fan. In addition to her parents, Deborah was preceded in death by her husband, William Ernest Black, in 2014, and two daughters, Shannon Elizabeth Thurman and Terri LeAnn Skinner. Deborah is survived by eight grandchildren; one great-grandson, Gavin Newton Kelley; three sisters, Pam Gentry of Marietta, GA, Barbara (Chris) White of Temple, GA, and Vickie (Wayne) Biester of Dallas; one brother, Buddy (Brenda) Gentry of Powder Springs, GA; best friend, Tammy (Kenny) Mulkey of Aragon, GA. Several nieces, nephews and other relatives and friends also survive. Funeral services for Deborah will be held on Wednesday morning, December 23, 2015, at 10:30 a.m. in the Chapel of Jeff Eberhart Funeral Home with Rev. Lamar Gentry, Rev. Steven Duncan and Mr. Lewis Gentry officiating. Interment will follow in the Georgia National Cemetery in Canton, GA. The family will receive friends on Tuesday evening, December 22, 2015, at the funeral home from 4:00 until 9:00 p.m. Pallbearers are asked to meet at the funeral home on Wednesday morning by 10:00 a.m. and include B.J. Gentry, Lewis Gentry, Charlie Thomas, Brandon Gallimore, Logan Kelley and Daniel Cain. Honorary pallbearers will include Kenny Mulkey and Ben Gallimore. In lieu of flowers, the family requests that memorial contributions be made to the Center for Family Resources, 995 Roswell Street, Suite 100, Marietta, GA, 30060, Attn: Vicky Warr. The staff of Jeff Eberhart Funeral Home is honored to serve the family of Mrs. Deborah “Day Day” Black.

The family of Mrs. Deborah A. Black created this Life Tributes page to make it easy to share your memories.

Send flowers to the Black family.