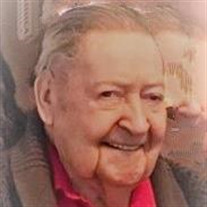 Mr. Dudley Joseph DeCastro, age 93, of Dallas, GA, passed away on Tuesday, September 10, 2019, in Dallas, GA. Mr. DeCastro was born on March 15, 1926, in Akron, OH, to parents, Mr. William Anthony DeCastro and Mrs. Mary Dilemmo DeCastro. Mr. DeCastro was married for 66 years to the love of his life, the late Mrs. Mildred Venarge DeCastro, until her passing in 2013. Mr. DeCastro was employed for many years as a machinist. He served in the United States Marine Corp and was a WWII veteran. Mr. DeCastro loved working with wood and making many different things out of wood. He enjoyed giving his wooden master pieces to all his friends and family. Mr. DeCastro was very talented and made the bullet proof glass for President Nixon’s limousine, he manufactured the fuel hose for the first Nasa space shuttle as well as the moving walkways out front of Walt Disney World in Orlando, Florida. He always had a joke and enjoyed playing cards. Mr. DeCastro was very dedicated to his children and was devoted to the love of his life, his wife until her passing. He loved spending quality time with his friends and family and will be fondly remembered by everyone who had the pleasure in knowing him. Mr. DeCastro is survived by his children, Mr. & Mrs. Dudley A. (Louise) DeCastro, Mrs. Doreen Jeanneret, Mrs. Vicki (JR) Keirns, Mr. Ronald DeCastro and Mrs. Margie (Robert) Duesenberry; sister, Mrs. Margaret Barber; 17 Grandchildren and 25 Great-Grandchildren. Many other relatives and close friends also survive. In addition to his wife and parents, Mr. DeCastro was preceded in death by granddaughter, Tammy Ann DeCastro, grandson, Chris Jeanneret, son-in-law, Robert Jeanneret, brothers, William DeCastro, Pat DeCastro, Frank DeCastro and Tommy DeCastro. Catholic Mass will be held on Monday, September 16, 2019 at 9:30 AM at the St. Mary’s Catholic Church in Akron, Ohio. Interment will follow at the Holy Cross Cemetery in Akron, OH. The family will be receiving friends on Thursday, September 12, 2019 from 6:00 PM – 8:00 PM at the Jeff Eberhart Funeral Home in Dallas, GA, and on Sunday, September 15, 2019 from 4:00 PM – 6:00 PM at the Dunn-Quigley Funeral Home in Akron, OH. Please join the family in honoring his life by visiting www.jeffeberhartfuneralhome.com to sign the register book and share a memory. Jeff Eberhart Funeral Home is honored to serve the family of Mr. Dudley Joseph DeCastro.

The family of Mr. Dudley Joseph DeCastro created this Life Tributes page to make it easy to share your memories.

Send flowers to the DeCastro family.