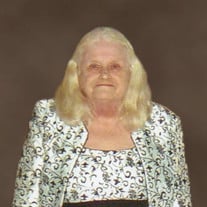 Mrs. Elizabeth Marie “Beth” Anderson, age 74, of Temple, GA, passed away on Sunday afternoon, October 25, 2015 at her residence. Beth was born on May 17, 1941, in Pulaski, VA, the daughter of the late Edward Elias Pennington and Vergie Mary Sirt Pennington. She had been a resident of Temple for the greater part of her life and was a member of the West Georgia Baptist Church. Prior to retirement, Beth was associated with Krystal restaurants. She loved to read and was an avid gardener. Beth is survived by her husband, Cleveland F. Anderson, Sr., to whom she was married on April 10, 1958; four daughters and a son-in-law, Angelia James of Temple, Eugenia and James Neal of Hiram, GA, Iris Jean Townsend of Hiram, and Mary McNair of Temple; one son and daughter-in-law, Cleveland Frank and Cheryl Anderson, Jr. of Marietta, GA; three special grandchildren, Jessica McNair, Blake McNair and Rueben Anderson. Nine other grandchildren and seventeen great-grandchildren also survive. Funeral services for Mrs. Elizabeth Marie “Beth” Anderson will be held on Tuesday morning, October 27, 2015 at 11:00 a.m. in the chapel of Jeff Eberhart Funeral Home with Rev. Bobby Jarrett officiating. Private interment will follow in the Georgia Memorial Cemetery in Marietta. Grandsons will serve as pallbearers and include Rueben Anderson, Samuel James, J.R. Neal, Joey Neal, Woody Townsend and Blake McNair. The staff of Jeff Eberhart Funeral Home is honored to serve the family of Mrs. Elizabeth Marie “Beth” Anderson.

The family of Mrs. Elizabeth Marie Anderson created this Life Tributes page to make it easy to share your memories.

Send flowers to the Anderson family.