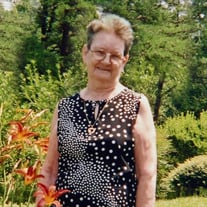 Mrs. Vera Genell Hulsey Cantrell, age 82, of Dallas, GA, passed away on Friday morning, May 13, 2016, at her residence. Genell was born on February 27, 1934, in Dallas to loving parents, the late Mr. Walter Lee Hulsey and Mrs. Lora Mae Herrin Hulsey. Genell worked for many years at the City Café as a dishwasher. In her spare time, she enjoyed puzzles, gardening, playing cards, vacationing with her family, and spending time with her grandchildren. A Christian, Genell loved the Lord and was of the Baptist faith. In addition to her parents, Genell is preceded in death by her husband of 32 years, Mr. Grover Orlando Cantrell Sr.; two sons, Mr. Mack Cantrell and Mr. Allen Cantrell and one son-in-law, Terry Waits. Genell is survived by seven children, Rachel Waits, Elizabeth (Danny) Adair, Leigh (David) Hancock, Ralph (Mary Ann) Cantrell, Darlene (R.L) Walker, Wanda (Maxi) Camp, and Thomas (Michelle) Cantrell all of Dallas; seventeen grandchildren; seventeen great grandchildren; one great-great-grandchild; one sister-in-law, Lois Hagan of Dallas; two daughters-in-law, Tersia Cantrell of Dallas and Sara Cantrell of Buchanan. Many other relatives and friends survive. The family would like to extend a special thank you to her beloved granddaughter, Christy (David) Buchanan and Mackenzie all of Dallas. The family appreciates everything that Christy and David did for her children and grandchildren during her illness. The funeral service for Genell Cantrell will be held on Sunday, May 15, 2016, at 2:00 PM in the Chapel of Jeff Eberhart Funeral Home with Rev. Jeremy Hicks officiating. Interment will follow at Peaceful Meadows Cemetery. Shane Waits, Kevin Waits, Richard Hancock, John Southerland, Chuck Reynolds, Adam Reynolds, Jason Cantrell, and Jonathan Cantrell will serve as pallbearers. The family will receive friends at the funeral home on Saturday, May 14, 2016, from 4:00 until 9:00 PM. Jeff Eberhart Funeral Home is honored to serve the family of Mrs. Vera Genell Hulsey Cantrell.

The family of Mrs. Genell Cantrell created this Life Tributes page to make it easy to share your memories.

Send flowers to the Cantrell family.