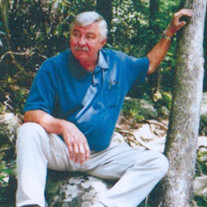 Guy Harold King of Dallas, GA passed away on December 22, 2018. He was a beloved husband, father, grandfather, great-grandfather, and friend. He leaves behind his wife, Susan, his children, Connie Downey, Lisa King, Robbie King and wife Julie, Cody King and wife Katya, and Matthew King. He had seven grandchildren, Ryan, Erin, Suzanna, Lucas, Janelle, Jocelyn, and Jenna as well as seven great-grandchildren: Sid, Odin, Fiona, Abigail, Elijah, Theodore, and Maddon. Guy was a newsman for more than 40 years. He started his career in radio, and then moved into TV where he was a reporter and anchor, a news director, a producer, writer, and senior copy editor. He began his journalism career in Mattoon, Illinois before moving on to Terre Haute, Indiana and then to Buffalo, New York. Guy arrived in New Orleans from Buffalo in February for an interview with a local news station. The temperature was in the 70s and it was Mardi Gras. This began his love affair with the city and the New Orleans Saints. Guy worked at several stations while there and became an active member of the Press Club of New Orleans, where he served as president from 1976 - 1977. Guy moved to Atlanta in 1986 and began working at CNN soon after. He was affectionately known as “Sky King”. Smart and quick with a joke or a story, he knew a lot about a lot of subjects. He was Google before there was Google. In his almost 20 years at CNN he covered every type of news story including presidential elections, natural disasters, the fall of the Berlin Wall and 9-11. He retired in 2006. He was a talented artist and a gifted writer. He was born in Oblong, Illinois to Guy King and Evelyn Cody King. Despite moving, his ties there were strong and meaningful. He kept in touch with many of those he grew up with. He also attended and helped plan several high school reunions. Gulf Shores, Alabama had become his second home. A celebration of life will be held there for family and friends at a later date. Jeff Eberhart Funeral Home is honored to serve the family of Guy Harold King.

The family of Mr. Guy Harold King created this Life Tributes page to make it easy to share your memories.

Send flowers to the King family.