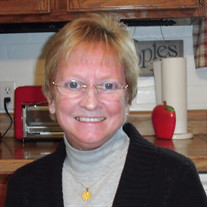 Mrs. Marian Elizabeth Goughler, affectionately known as Jackie by her friends and family, age 63, of Dallas, GA, passed away peacefully on Monday, December 18, 2017, at Wellstar Kennestone Hospital with her family by her side. Jackie was born on March 28, 1954, in Oil City, PA, to Mr. Leroy Ziegler and Mrs. Genevieve M. McDonald. Jackie graduated from Cranberry Area High School in 1974 and worked many years as a caregiver and in childcare. Jackie was a proud wife, mother, grandmother and friend to everyone she met. She was always smiling, laughing and never missed an opportunity to make a new memory with her loved ones. Jackie knew the value of being prepared and was always on time. You could depend on her. Jackie always made the best of any situation and did so with grace and love. She was most proud of being independent, strong and teaching her children and grandchildren the same. She expected the best and she gave her best in return. Jackie was survived by her beloved husband, Mr. Barry A. Goughler, Sr. of Dallas, GA; two sons and daughter-in-laws, Barry (Brandi) Goughler, Jr. of Dallas, GA and Shawn (Emily) Goughler of Chattanooga, TN; four grandchildren, Caiti, Nick, Logan and Claire; siblings, Mary England, Lilly Krizon, Ronald Ziegler, Brenda Pressley and Vicki Jackson. Many other friends and family members also survive. In addition to her parents, Jackie was preceded in death by her brother, Leroy Eugene Ziegler; and two sisters, Judy Lepley and Donna Slatton. In keeping with Jackie's wishes, she was cremated and a Celebration of Life will be held on Saturday, December 30, 2017, at 11 AM, at the First Baptist Church in Dallas, GA with Dr. Todd Gaddis and Rev. Pat Williams officiating. A reception will follow in the social hall directly after the service. In lieu of flowers, the family has requested that donations be made to the family to help cover funeral expenses or that donations be made to www.scleroderma.org in honor of Jackie's memory. Please join the family in honoring her life by visiting www.jeffeberhartfuneralhome.com to sign the register book and share a memory. Jeff Eberhart Funeral Home is honored to serve the family of Mrs. Marian "Jackie" Elizabeth Goughler.

Mrs. Marian Elizabeth Goughler, affectionately known as Jackie by her friends and family, age 63, of Dallas, GA, passed away peacefully on Monday, December 18, 2017, at Wellstar Kennestone Hospital with her family by her side. Jackie was born... View Obituary & Service Information

The family of Mrs. Jackie Elizabeth Goughler created this Life Tributes page to make it easy to share your memories.

Send flowers to the Goughler family.