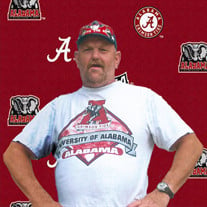 Mr. James Franklin King, age 58, of Temple, GA, passed away on Thursday, April 18, 2019, at his residence. James was born on September 6, 1960, in Cullman, AL, to parents, Mrs. Clovis Smith King and the late Mr. Johnny “Frank” Franklin King. He worked as a metal fabricator for many years. James had a great sense of humor, loved to have a good time and party with his friends. He enjoyed going to bike rallies in his spare time and loved listening to good music, especially Lynyrd Skynyrd. James enjoyed spending time with his family and will be missed by all who knew him. James is survived by his son and daughter-in-law, Joel (Autumn) King; daughter, Beth King; mother, Clovis Smith King; brother and sister-in-law, Daniel (Pam) King; sister, Regina King; grandchildren, Kaylee King, Allie King, Colt King, Brad Sargent, Chevy Sargent and Dylan King. Many other relatives and close friends also survive. In addition to his father, James was preceded in death by his beloved wife, Mrs. Judy Wheeling. A visitation to honor James’ memory, will be held in the Jeff Eberhart Funeral Home Chapel on Monday, April 22, 2019, from 5:00 PM – 9:00 PM. Per James’ request, he will be cremated directly after the visitation. Please join the family in honoring his life by visiting www.jeffeberhartfuneralhome.com to sign the register book and share a memory. Jeff Eberhart Funeral Home is honored to serve the family of Mr. James Franklin King.

The family of Mr. James Franklin King created this Life Tributes page to make it easy to share your memories.

Send flowers to the King family.