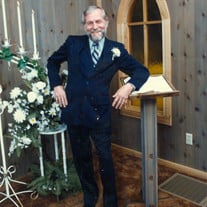 Mr. James Edward “Toby” Roper, Sr., age 76, of Dallas, GA, passed away on Wednesday morning, July 13, 2016, in a local hospital. Toby was born on August 26, 1939, the son of the late Ezra Hamilton Roper and Ruby Ethel Braswell Roper. He was a floor covering installer for several years and was of the Presbyterian faith. Toby enjoyed fishing and building things out of wood. In addition to his parents, he was preceded in death by a son, James Edward “Eddie” Roper, Jr., and a step-son, Scott Smith. Toby is survived by his wife, Audrey Gregory Roper, to whom he was married on September 5, 1987; one daughter and son-in-law, Kay and Dan Mathis of Acworth, GA; two step-sons, Jerry Smith and his wife, Christine, of Phoenix, AZ, and Robert Smith of Hoschton, GA; two sisters, Jean Gravitt of Dallas, and Cathy Crowe of Marietta, GA. A memorial service to honor Toby’s life will be held on Saturday morning, July 16, 2016 at 11:00 a.m. in the chapel of Jeff Eberhart Funeral Home with Minister Randy Stubblefield officiating. The staff of Jeff Eberhart Funeral Home is honored to serve the family of Mr. James Edward “Toby” Roper, Sr.

The family of Mr. James Edward Roper, Sr. created this Life Tributes page to make it easy to share your memories.

Send flowers to the Roper family.