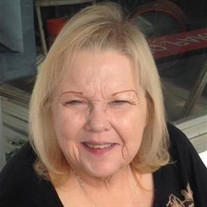 Mrs. Joanne Cohran Hitchcock, age 63, of Villa Rica, GA, passed away on Sunday, November 19, 2017, at Wellstar Kennestone Hospital. Joanne was born on December 5, 1953, in Austell, GA, to loving parents, Mrs. Louise House and the late Mr. Alton "Coon" Cohran. She was a service representative for AT&T for many years and was of the Methodist faith. In addition to her father, Mr. Alton "Coon" Cohran, Joanne was preceded in death by her beloved husband, Mr. Rickey L. Hitchcock. Joanne is survived by her mother, Mrs. Louise House, several cousins, and many other relatives and close friends also survive. Funeral services for Joanne will be held on Tuesday, November 21, 2017, at 2 PM, in the Chapel of Jeff Eberhart Funeral Home with Rev. James Smith officiating. Interment will follow at the Shipp Cemetery in Hiram, GA. The family will receive friends at the funeral home on Tuesday, November 21, 2017, from 12-2 PM. Jeff Eberhart Funeral Home is honored to serve the family of Mrs. Joanne Cohran Hitchcock.

The family of Mrs. Joanne Cohran Hitchcock created this Life Tributes page to make it easy to share your memories.

Send flowers to the Hitchcock family.