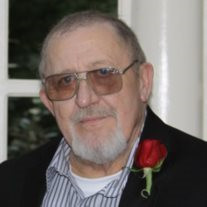 Mr. John Noel Robinson, age 66, of Dallas, passed away on Thursday, February 6, 2014 at Wellstar Tranquility Hospice at Kennesaw Mountain. John was born on May 17, 1947, in Pikeville, KY to loving parents the late Mr. Marlin Laverne Robinson and Mrs. Betty Lou Bartley. He enlisted in the United States Navy in 1966 and served during the Vietnam War. After being discharged from the Navy he worked with Bellsouth Telephone Service for 32 years. Mr. Robinson was of the Baptist Faith and was baptized at New Hope Baptist Church. He enjoyed Fishing. He was an avid sports fan and enjoyed Georgia Bulldogs Football and Basketball. John is survived by three children Shane & Gina Robinson of Dallas, Tricia Robinson of Coral Springs, FL, and Jennifer & Ryan Kemp of Acworth; seven grandchildren Savannah & CJ Carter of Ocala, FL, Hailey & John Thomas of Woodstock, Tanner Noel Robinson of Dallas, Madison Fechter, Gavin Bresnock both of Coral Springs, FL, Reid Kemp & Owen Kemp both of Acworth; two great grandchildren Wyatt Carter of Ocala, FL, and Gracie Thomas of Woodstock; three brothers Jimmy & Betty Robinson of Dallas, Kenny & Robin Robinson of Rockmart, and Roger Robinson of Dallas; two sisters Dale Wilkie of Cartersville, and Lavon & Joe Menchio of Douglasville; several nieces, nephews, and many other relatives and friends. He was preceded in death by his parents. Funeral services for Mr. John Robinson will be held in the Chapel of Jeff Eberhart Funeral Home on Sunday, February 9, 2014 at 2 pm with Reverend Thomas Cole and Don Scoggins officiating. At the request of Mr. Robinson, his body will be cremated following the service and no interment is scheduled at this time. The family will receive friends at the funeral home on Saturday, February 8, 2014 from 4 – 9 pm and Sunday, February 9, 2014 from 9 am until the time of service. Please join the family in honoring his life by visiting www.jeffeberhartfuneralhome.com to sign the register book and share a memory. Jeff Eberhart Funeral Home of Dallas, GA is honored to serve the family of Mr. John Robinson.

The family of Mr. John N. Robinson created this Life Tributes page to make it easy to share your memories.

Send flowers to the Robinson family.