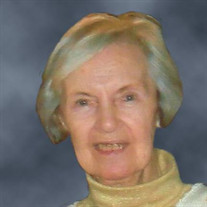 Mrs. Katherine L. Rockhold, age 86, passed away on the evening of January 7, 2015 at Wellstar Cobb Hospital. Katherine was born in Fulton County on September 30, 1928, to loving parents the late Mr. Hiram Barron and Mrs. Bertha Hayes Barron. Katherine was of the Methodist faith. She worked as secretary for Glidden Paints and for Coats & Clark Thread Mill until her retirement in 1975. In her spare time, she enjoyed spending time with her family as well as cooking for them and gardening. In addition to her parents, Katherine was preceded in death by her husband, Edward K. Rockhold, one brother, Bill Barron and one sister, Hilda Shoemake. Katherine is survived by one daughter and son-in-law, Rela & David Sewell of Douglasville, GA; one son and daughter-in-law, Rickey and Angela Rakestraw of Dallas, GA; three grandchildren, Tabitha Chastain, Rebecca (Justin) Richardson, Allyson Rakestraw; four great-grandchildren, Brandon Allen, Dylan Allen, Jackson Jones and Ava Richardson. Also surviving are one niece, Cherriee Carter, one nephew Michael Barron as well as many other relatives and friends. Funeral services for Katherine Rockhold will be conducted on Saturday, January 10, 2015, at 11:00 A.M. in the Chapel of Jeff Eberhart Funeral Home. Interment will follow at Riverview Memorial Park in Smyrna, GA. Katherine will lay in-state at Jeff Eberhart Funeral Home where the family will receive friends on Friday, January 9, 2015, from 4;00 until 7:00 PM. The staff of Jeff Eberhart Funeral Home is honored to serve the family of Mrs. Katherine L. Rockhold.

The family of Mrs. Katherine Lee Rockhold created this Life Tributes page to make it easy to share your memories.

Mrs. Katherine L. Rockhold, age 86, passed away on the evening...

Send flowers to the Rockhold family.