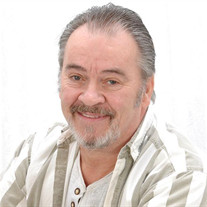 Mr. Kenneth T. Tidwell affectionately known as “Terry”, age 60, of Douglasville, GA, passed away peacefully on September 12, 2015, at his residence. Terry was born on February 19, 1955 in Villa Rica, Georgia to loving parents Mr. Ben Jackson Tidwell and Mrs. Lessie Lou Brown. Terry was a retired truck driver at the time of his death and was of the Baptist faith. In his spare time he enjoyed yard work, cooking and was an avid football fan and Atlanta Braves fan. Terry is preceded in death by his parents, a his wife of many year, Deborah Ann Tidwell. Terry is survived by his wife Allyson Ervin Tidwell; two sons Logan A. Tidwell and Jordan K. Tidwell both of Douglasville, GA and one daughter Baillie Tidwell of Douglasville, Georgia, 1 brother Mr. Jackie (Margaret) Tidwell of Douglasville, GA, 4 sisters Mrs. Opal (Winfred) Morris, Mrs. Carolyn (Billy) Morris, Mrs. Betty Fuller all of Douglasville, GA and Mrs. Dorothy (Doug) Alsobrook of Dallas, GA. Several nieces and nephews and many other relatives and friends also survive. The funeral service for Terry will be held on Tuesday, September 15, 2015, at 2:00 PM in the Chapel of Jeff Eberhart Funeral Home with Rev. Wayne Morris officiating. Interment will follow at Paulding Memorial Gardens Cemetery in Hiram, GA. The family will receive friends on Monday, September 14, 2015 from 4-9 PM. The family has requested in lieu of flowers donations can be made in honor of Terry Tidwell to the Emory ALS Clinic at Emory University or MDA Atlanta Chapter. Jeff Eberhart Funeral Home is honored to serve the family of Mr. Kenneth Terry Tidwell.

The family of Mr. Kenneth "Terry" Tidwell created this Life Tributes page to make it easy to share your memories.

Send flowers to the Tidwell family.