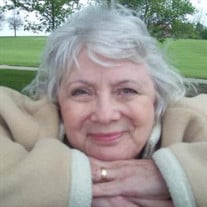 Mrs. LaRue Anne Withers, age 77, of Rockmart, GA, passed away on Friday evening, May 20, 2016. Mrs. Withers was born in Saint Benedict, PA, on June 12, 1938, the daughter of the late Clinton Telford Saylor and Elizabeth Keough Saylor. She was a member of the Saint Andrews Angilican Church of Rome, GA, and was a housewife and homemaker. In addition to her parents, Mrs. Withers was preceded in death by a brother, Benjamin Saylor. Mrs. Withers is survived by her husband of 42 years, Leon Withers; seven children and their spouses, Kathleen and Tim Orendorff of Geneseo, IL, Colleen and Frank Blackburn of Alexandria, VA, Margaret and Tim Dean of Rockmart, GA, Cletus Benjamin, Jr. of Lithia Springs, GA, Brian and Catie Benjamin of Escondido, CA, Christian and Dawn Benjamin of Rockmart, and Mark Benjamin of Craigsville, VA; brother, Henry Saylor of Gambrills, MD. Sixteen grandchildren and sixteen great-grandchildren also survive. A Celebration of Life for Mrs. Withers will be held on Thursday evening, May 26, 2016, at 6:00 p.m. in the South Broad United Methodist Church of Rome with Father Austin Goggans officiating. In lieu of flowers, the family requests that memorial contributions in honor of Mrs. Withers be made to your local Humane Society. The staff of Jeff Eberhart Funeral Home is honored to serve the family of Mrs. LaRue Anne Withers.

The family of Mrs. LaRue Anne Withers created this Life Tributes page to make it easy to share your memories.

Send flowers to the Withers family.