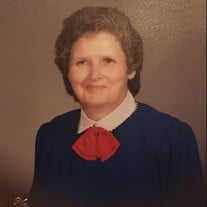 Myra Lindsey Vincent 02-20-38 to 11-15-2020 It is with great sadness that we announce the passing of Myra Lindsey Vincent of Dallas, Georgia. Myra was born 02-20-1938 in Atlanta, Georgia to Mrs. Inez McAdams Lindsey and Mr. Hubert Carl Lindsey (formerly of Dallas, Georgia). She had a great love for her parents and always told wonderful stories of her childhood and growing up in Atlanta. She adored her sister Linda Lindsey Morgan. Telling stories about her and Linda could bring a smile or laugh to anyone. She was preceded in death by these family members and mourned their absence but now is rejoicing and reunited with them in heaven. Myra attended O’Keefe High School in Atlanta, Georgia. She was a cheerleader and active member of the student body and Class of 1955. She fondly recalled many happy times of her days at O’Keefe. She was very modest and never boasted. However, her annuals and letters from classmates were a treasure to read and reminisce about the wonderful person she was then. She was a beautiful, elegant young lady and lived every day to its fullest. She worked at Gulf Oil in Atlanta, where she met the love of her life and best friend, Robert Wayne Vincent. They were married for 59 years and were devoted, committed and loving throughout. She could still tell you what he was wearing when she met him. She lovingly talked about their dating and their early days. This was a “love at first sight” relationship that grew into a legendary love that we all could learn from. A while after being married they moved to Austell, Georgia and raised their family. She worked outside the home for a while at jobs including a bookkeeper and then a pharmacy assistant at Eckerd Drug Store, later known as Rite Aid. However, her most treasured and joyous title was Loving Mother and Devoted Wife. Myra was a Child of God from an early age. She was raised by loving, Christian parents and carried this legacy on to her own family. She was baptized as a child at Belleview Baptist Church in Atlanta. She was a devout Christian and gave selflessly of herself, her time and her resources throughout her life. She loved the Lord and never waivered in her faith, love or trusting, even during her last days. She worked tirelessly throughout her life volunteering at the various churches she attended, holding the role of Sunday School teacher, Nursery Attendant, Choir member and many others for many years. Even into her late retirement years, Wayne and Myra led and directed a Sunday School class for many years at Brian Center Nursing Home in Austell Georgia. Anyone who knew Myra knew the true Love of God, she was an exemplary example for all. Although our hearts ache and we will miss her every day, she has now received her reward in Glory. She has been reunited with all the family and friends long passed. Our hope and comfort are in knowing we will see her again one day. Preceded in death by her parents Inez and Hubert Lindsey and sister Linda Lindsey Morgan (Don Morgan) and nephew Allen Morgan. She is survived by her husband, Wayne Vincent of Austell, Ga. Daughter Moni Hendrix (J.D.), Son Eric Vincent (Sandy), and Son David Vincent (Kim). Sister in law Christine Vincent Edwards (Jerry). Niece Susan Morgan Lalor. Kim Edwards Brooks and Jerri Edwards Cauley. Grandchildren: Staff Sgt. Jeremy Hendrix of Fort Eustis Army Base, Va. Jason Hendrix (Jessica) Rockmart, Ga. Alex Vincent, San Bruno, Ca., Jarod Vincent (Emily) Dallas, Ga. and Erin Vincent, Dallas, Ga. Great Grandchildren: Julie Hendrix Bowman (Elijah), Isaiah Hendrix, Jordan Hendrix, Hannah Hendrix, Austin Hendrix and Andrew Hendrix. An informal Celebration of Life will be held at Highest Praise Church of God 3771 Floyd Rd. Austell, Ga. Saturday Nov 21st. You may drop in anytime between 2:30-5:30pm to share your stories, love and condolences with family and friends. Jeff Eberhart Funeral Home is honored to serve the family of Myra Lindsey Vincent.

Myra Lindsey Vincent 02-20-38 to 11-15-2020 It is with great sadness that we announce the passing of Myra Lindsey Vincent of Dallas, Georgia. Myra was born 02-20-1938 in Atlanta, Georgia to Mrs. Inez McAdams Lindsey and Mr. Hubert Carl Lindsey... View Obituary & Service Information

The family of Mrs. Myra Lindsey Vincent created this Life Tributes page to make it easy to share your memories.

Send flowers to the Vincent family.