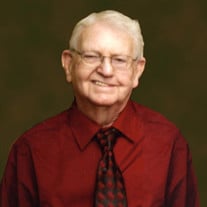 Mr. Nathaniel “Curtis” DeMore, age 85, of Dallas, GA, passed away peacefully at Cottage Landing Assisted Living in Carrollton, GA. Curtis was born on October 31, 1929, in Habersham County, the son of the late Mr. Percy Howard DeMore and Mrs. Connis Roberts DeMore. Curtis was a very creative, hardworking, and outgoing man. He loved the Lord and people, and he enjoyed life to the fullest. Curtis served in the United States Army as a Sergeant during the Korean Conflict. He worked for Georgia Power for many years as an electrician and a maintenance supervisor. In his spare time, though, he enjoyed carpentry and loved woodworking. He loved to be outdoors and enjoy nature. He was also a very talented musician and lent his talents to the Pea Pickers Band for many years. An active member of the community, Curtis served in a variety of capacities throughout several well-known organizations in his lifetime. He was a part of the Smyrna Masons for 50 years. In addition, Curtis also served as the President of the Kiwanis Club and was a member of the Georgia Power Ambassador Retirees. Always willing to help others Curtis was a steward of the Methodist church for many years as well. Curtis is preceded in death by his beloved parents and his wife of 23 years Joyce Ellington DeMore. He is survived by two daughters, Mrs. Sonya (Morris) Moss of Buchanan and Mrs. Myrna (Mike) Johnson of Dallas; 1 son, Mr. Mark (Sandy) DeMore of Silver Creek; 1 brother, Mr. Parris R. DeMore of Aragon; 7 grandchildren, 1 great granddaughter and several nieces and nephews also survive. The funeral service for Mr. Curtis DeMore will be conducted on Thursday, March 19, 2015, at 1 PM at New Georgia Baptist Church with Dr. Kevin Ellington officiating. Curtis will lie in state at the church from 12-1 PM prior to the service. Interment will follow at Greenlawn Cemetery in Roswell. The family will receive friends at the funeral home on Wednesday, March 18, 2015, from 2-4 PM and from 6-8 PM. Jeff Eberhart Funeral Home is honored to serve the family of Mr. Nathaniel “Curtis” DeMore.

The family of Mr. Nathaniel Curtis DeMore created this Life Tributes page to make it easy to share your memories.

Send flowers to the DeMore family.