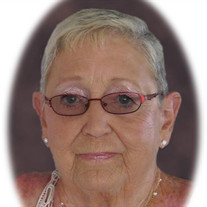 Mrs. Peggy A. Spann, age 77, of Dallas, GA, passed away at Kennestone Hospital on Wednesday, December 3, 2014. Peggy was born on April 29, 1937, in West Palm Beach, Florida, to loving parents, the late Mr. Flavious Sidney Landers, Sr., and Mrs. Margaret McQuillen Landers. For a number of years she was bookkeeper for Lawrence, See and Beavers until the time of her retirement. Peggy and her late husband were active members of the Lions Club in Naples, Florida before moving to Georgia. Peggy enjoyed working with crafts, showing her dogs and was of the Protestant faith. In addition to her parents she was preceded in death by her husband, Michael Eugene Spann, a grandson, Jason Roark, and a brother, Flavious Sidney Landers, Jr. Peggy is survived by two children, Teresa Roark and her husband, Kenneth, of Dallas, GA, and Mickey Spann and his wife, Carol Ann, of Kennesaw, GA; two grandchildren, Scott Spann and Todd Spann; three great-grandchildren, Alex Spann, Jameson Spann and Ireland Winters. Several nieces, nephews and many other family members and friends also survive. A memorial service to honor the life of Mrs. Peggy A. Spann will be held on Thursday evening, January 8, 2015, at 7:00 pm in the Jeff Eberhart Funeral Home Chapel with Rev. Thomas Cole officiating. A private family inurnment service will be on January 9, 2015, at 11:00 am at Georgia National Cemetery in Canton, GA. In lieu of flowers the family requests that memorial contributions be made in Peggy’s name in honor of Mr. Jennings Winters to the ALS Foundation, Georgia Chapter, 1955 Cliff Valley Way, Suite 116, Atlanta, GA, 30329. The staff of Jeff Eberhart Funeral Home is honored to serve the family of Mrs. Peggy A. Spann.

The family of Mrs. Peggy Spann created this Life Tributes page to make it easy to share your memories.

Send flowers to the Spann family.