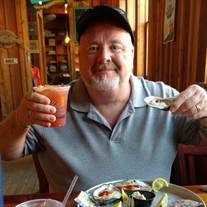 Mr. Randy Ray Langford, age 54, of Temple, GA, passed away suddenly on Tuesday, October 10, 2017. Randy was born on December 20, 1962, in Columbus, MS, to parents, Mr. A.W. Langford and Mrs. Martha Wright Harris. He was a loving father and worked as a supervisor at Pollock Paper Distributors for many years. In his spare time, he enjoyed spending time with his friends and family. Randy was preceded in death by his sister, Brenda Key and his brother, Barry Langford. Randy is survived by his beloved wife, Alice Langford; son, Timothy Langford; step-son, Christopher Wilson; mother and step-father, Martha and Bruce Harris; siblings and their spouses, Tammy Moore, Mike (Gail) Langford, Danny (Ann) Langford, Carol Jolly and Lisa Bunch. Many other relatives and friends also survive. A Celebration of Life to honor Randy’s memory will be held in the Chapel of Jeff Eberhart Funeral Home on Sunday, October 15, 2017, at 3 PM, with Bro. Bill Coleman officiating. The family will receive friends at the funeral home on Sunday, October 15, 2017, from 2-3 PM. Please join the family in honoring his life by visiting www.jeffeberhartfuneralhome.com to sign the register book and share a memory. Jeff Eberhart Funeral Home is honored to serve the family of Mr. Randy Ray Langford.

The family of Mr. Randy "Big Dog" Langford created this Life Tributes page to make it easy to share your memories.

Send flowers to the Langford family.