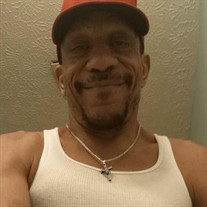 Mr. Reginald Anthony Hall, affectionately known as Reggie by his friends and family, age 53, of Dallas, GA, passed away on Thursday, July 18, 2019, at Wellstar Paulding Hospital. Reggie was born on November 14, 1965, in San Antonio, TX, to parents, Mrs. Mary Alice Chambers and the late Mr. Albert Hall. He was a veteran of the United States Army and was a carpenter in the construction industry for many years. An avid sports fan, Reggie loved the Minnesota Vikings and Nascar Racing. He enjoyed fishing, playing horseshoes and little league coaching. Reggie loved spending quality time with his family and will be dearly missed by all who knew him. Reggie is survived by his beloved wife, Mrs. Sheila Rene McCurley Hall; son, Mr. Zion Anthony Hall; daughter, Miss Mary Jenea Hall; mother, Mrs. Mary Alice Chambers; brother, Mr. Robert Christopher Chambers. Many other relatives and friends also survive. In addition to his father, Reggie was preceded in death by his son, Mr. Isaiah Christopher Hall. A Celebration of Life to honor the memory of Reggie will be held on Saturday, July 27, 2019, at 1:00 PM, from the chapel of the Jeff Eberhart Funeral Home. The family will be receiving friends at the funeral home on Saturday, July 27, 2019, from 11:00 AM until the hour of the service at 1:00 PM. In lieu of flowers, the family has requested that donations be made to the funeral home to help cover the funeral expenses. Please join the family in honoring his life by visiting www.jeffeberhartfuneralhome.com to sign the register book and share a memory. Jeff Eberhart Funeral Home is honored to serve the family of Mr. Reginald “Reggie” Anthony Hall.

Mr. Reginald Anthony Hall, affectionately known as Reggie by his friends and family, age 53, of Dallas, GA, passed away on Thursday, July 18, 2019, at Wellstar Paulding Hospital. Reggie was born on November 14, 1965, in San Antonio, TX, to... View Obituary & Service Information

The family of Mr. Reggie Anthony Hall created this Life Tributes page to make it easy to share your memories.

Send flowers to the Hall family.