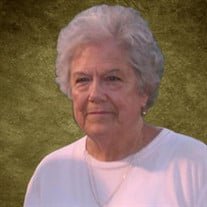 Mrs. Shirley D. White, age 80, of Dallas, GA, passed away Wednesday morning, July 13, 2016, following a lengthy illness. A native of Paulding County, GA, Shirley was born on January 3, 1936, the daughter of the late James Edgar Durham and Annie Ruth Barber Durham. Prior to retirement she was associated with Medical Arts Clinic for a number of years. Shirley was a member of Mount Zion Baptist Church and enjoyed spending time with the ladies of her Sunday School Class. She also loved to travel and sing but most of all, being with her grandchildren. In addition to her parents, Shirley was preceded in death by her husband, Robert Chester White, on July 8, 2001, whom she married on November 25, 1954. a brother, Jimmy Durham, and a sister, Frances Graham, also preceded her in death. Shirley is survived by two sons and daughters-in-law, Greg and Darlene White, and Mark and Rene` White, all of Dallas. Ten grandchildren and eight great-grandchildren also survive. Funeral services for Mrs. Shirley D. White will be held on Friday morning, July 15, 2016, at 11:00 a.m. in the Mount Zion Baptist Church with Rev. Mike Wheeler and Rev. Butch Cole officiating. Interment will follow in the Peaceful Meadows Memorial Cemetery. Shirley will remain at Jeff Eberhart Funeral Home where the family will receive friends on Thursday evening, July 14, 2016, from 4:00 until 8:00 p.m. Pallbearers are asked to meet at the church on Friday by 10:30 a.m. and include Steven White, Daren White, Brad White, Shane White, Cliff White and Alex Turner. The staff of Jeff Eberhart Funeral Home is honored to serve the family of Mrs. Shirley D. White.

The family of Mrs. Shirley D. White created this Life Tributes page to make it easy to share your memories.

Send flowers to the White family.