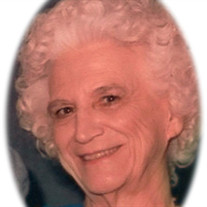 Mrs. Thelma Lorene Mullins affectionately known to her family and friends as “Granny”, age 98, of Douglasville GA passed away peacefully on Friday, January 23, 2015. Thelma was born on September 7, 1916 in Fork Ridge, Tennessee to loving parents the late Mr. Andy Wilburn and Mrs. Delia Jane Williams Wilburn. Thelma held various jobs throughout her life, but most notably she worked as a floor walker for a department store. In her spare time, she enjoyed quilting and spending time with her family. Thelma was a Christian and attended Mountain View Church of God for the last six years. She was also a member of the Order of the Eastern Star. Thelma is survived by three children, Mrs. Joan Thomas of Huntsville, AL and Mr. Doug and his wife Zana Cox of Douglasville, GA and Mrs. Janice Radabaugh of Newport, MI; 1 sister, Mrs. June Pauline Hunter of Middlesboro, KY; 23 grandchildren, many great grandchildren, and many great great grandchildren. Several nieces and nephews and many other relatives and friends also survive. She is preceded in death by her late husband Mr. Fred Mullins, her beloved parents, and five siblings. She is also preceded in death by three children, Mr. James A. Cox, Jerry Wayne Cox, and Thelma Lou Cox. Funeral services for Thelma Lorene “Granny” Mullins will be conducted in the chapel of Jeff Eberhart Funeral Home on Sunday, January 25, 2015 at 2 PM with Rev. Kenny Jacobs officiating. The family will receive friends at the funeral home on Sunday, January 25, 2015 from 11 AM-2 PM. Interment will follow at the Green Hills Memorial Gardens Cemetery in Middlesboro, KY at a later date. Jeff Eberhart Funeral Home is honored to serve the family of Mrs. Thelma Lorene “Granny” Mullins.

The family of Mrs. Thelma Lorene Mullins created this Life Tributes page to make it easy to share your memories.

Send flowers to the Mullins family.