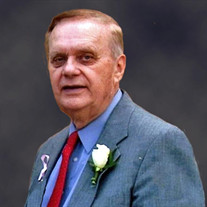 Mr. Theodore Ronald Pawlowski, age 79, of Villa Rica, GA passed away peacefully at A.G. Rhodes Nursing Home in Marietta on Wednesday, March 4, 2015. Theodore was born on May 30, 1935 in Buffalo, NY to loving parents, the late Mr. Theodore A. Pawlowski and Mrs. Viola Olearczyk Benbenek. He was a member of St. Vincent de Paul Catholic Church in Dallas, GA. A veteran, Theodore served in as an Army Ranger in the Korean Conflict. In his spare time, he was an avid golfer. He is preceded in death by his beloved parents and his wife, Mrs. Mary Ann Przybylak Pawlowski. Mr. Theodore R. Pawlowski is survived by his four sons, Christopher (Donna) Pawlowski of Newburgh, NY, Timothy (Melissa) Pawlowski of Denver, NC, Theodore (Adrienne) Pawlowski of Villa Rica, GA, and Douglas (Amy) Pawlowski of Kennesaw, GA; six grandchildren, five step grandchildren, and many other relatives and friends also survive. Funeral services for Theodore R. Pawlowski will be conducted on Tuesday, March 10, 2015 at 12 PM at St. Vincent de Paul Catholic Church in Dallas, GA with Father Adrian Pleus officiating. Interment will follow at Cheatham Hill Memorial Park Cemetery in Marietta, GA. The family will receive friends at the funeral home on Monday, March 9, 2015 from 4-8 PM and on Tuesday, March 10, 2015 from 9 AM until we leave in procession for the church at 11:40. In lieu of flowers the family has requested that donations be made to St. Jude’s Children’s Hospital. Donations can be made via web at www.stjude.org or by phone at 1-800-805-5856. Jeff Eberhart Funeral Home is honored to serve the family of Mr. Theodore R. Pawlowski.

The family of Mr. Theodore Ronald Pawlowski created this Life Tributes page to make it easy to share your memories.

Send flowers to the Pawlowski family.