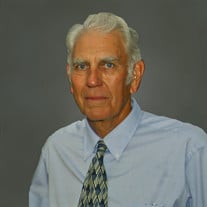 Mr. Allen Wilson “Grand” Mayfield, age 87, of Dallas, GA, passed away on Monday, April 13, 2015, at his residence. Mr. Mayfield was born on July 21, 1927, in Fairburn, GA, the son of the late John Wilburn Mayfield and Inez Terry Mayfield. He had been a resident of Dallas and Paulding for the greater part of his life and was a member of the New Georgia Baptist Church. Mr. Mayfield was a veteran of World War II, having served in the United States Army Air Corp. He was a general contractor, having developed and built several subdivisions in the Paulding County area. Mr. Mayfield loved hunting, fishing and was an avid country music fan. In addition to his parents, he was preceded in death by four sisters and four brothers. Mr. Mayfield is survived by his wife, Betty Jo Cole Mayfield, to whom he was married on January 23, 1946; two daughters and son-in-law, Donna and Jimmy Pace, and Debbie Fields, all of Dallas; four grandchildren and their spouses, Brandi and Jason Warlick, Jaime and Valerie Pace, Donny and Jamie Pace and Nicholas and Shanna Fields; one brother, Dallas and Carolyn Mayfield of Villa Rica, GA; one sister, Joan Capes of Carrollton, GA; a sister-in-law, Fonda Beavers and her husband, Lewis of Dallas; a brother-in-law, Jack Cole and his wife, Ruth, also of Dallas; a sister-in-law, Ezell Mayfield of Hiram, a sister-in-law, Camely Mayfield of Alpharetta. Eight great-grandchildren; Elizabeth, Finn, Emily, Maggie, Jonah, Elyssa, Malachi and Kennedy; a special niece, Amy (Jonathan) Culpepper, a special nephew, Adam Beavers along with a host of other relatives also survive. A memorial service to commemorate the life of Allen Wilson “Grand” Mayfield will be held on Thursday evening at 7:00 p.m. in the chapel of Jeff Eberhart Funeral Home with Rev. Keith Guyton and Rev. Scott Thomas officiating. The family will receive friends at the funeral home on Thursday from 5:00 until 7:00 p.m. In lieu of flowers the family requests that memorial donations be made to Pine Ridge Church, 300 Pine Ridge Church Road, Dallas, GA, 30157, or Amedisys Hospice Care of Cartersville, 12 Felton Place, Cartersville, GA, 30120. The staff of Jeff Eberhart Funeral Home is honored to serve the family of Mr. Allen Wilson “Grand” Mayfield.

The family of Mr. Wilson Mayfield created this Life Tributes page to make it easy to share your memories.

Send flowers to the Mayfield family.