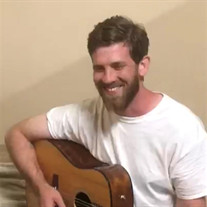 Mr. Zachary Scott “Zac” Reeves, age 30, of Acworth, GA, passed away on Thursday April 16, 2020. Mr. Reeves was born on November 28, 1989 in Marietta, GA to parents, Mr. Marc Alan Reeves and Mrs. Deanna Faith Proctor Gramling. Mr. Reeves was a very hardworking and loving husband, daddy, son, brother, and friend to all who knew him. His children were his world and he loved them very much. In his spare time, Mr. Reeves passion was music. He enjoyed playing his guitar, singing and writing songs. An avid outdoorsman, he loved spending time outside, especially landscaping and working with flowers. Mr. Reeves was a treasure to all who knew him and will be dearly missed. Mr. Reeves is survived by his wife, Mrs. Lorika “Lori” Ryan Reeves; children, Judah Grayson Reeves and Alina Jade Reeves; mother, Mrs. Deanna Gramling (Mylon), father, Mr. Marc Reeves (Jessie), siblings, Wesley Reeves, Gage Reeves, Kari Reeves, Caleb Gramling, Aubrey Reeves, Abigayle Parks, Megan Manktelow and Justice Clark. Grandparents, Mr. & Mrs. Gary (Joanie) Sander and Carolyn Summerlin. Many nieces, nephews, aunts, uncles, cousins and many other family and friends also survive. Due to the current restrictions with Covid-19 a family only visitation will be held on Monday April 20, 2020. The family only visitation will be following the CDC guidelines of only 10 family members will be allowed in at a time. All others will remain in line in their vehicles until instructed to enter. In keeping with his wishes, Mr. Reeves will be cremated following the immediate family viewing. A Celebration of Life will be held at a later date once everyone is allowed to gather. The family has requested that flowers be held and sent to the Celebration of life when announced. Please join the family in honoring his life by visiting www.jeffeberhartfuneralhome.com to sign the register book and share a memory. To send flowers or a memorial gift to the family of Mr. Zachary Scott “Zac” Reeves please visit our Sympathy Store. Jeff Eberhart Funeral Home is honored to serve the family of Mr. Zachary Scott “Zac” Reeves.

The family of Mr. Zachary "Zac" Reeves created this Life Tributes page to make it easy to share your memories.

Send flowers to the Reeves family.